There will be two million electric cars on the road by the end of 2016. 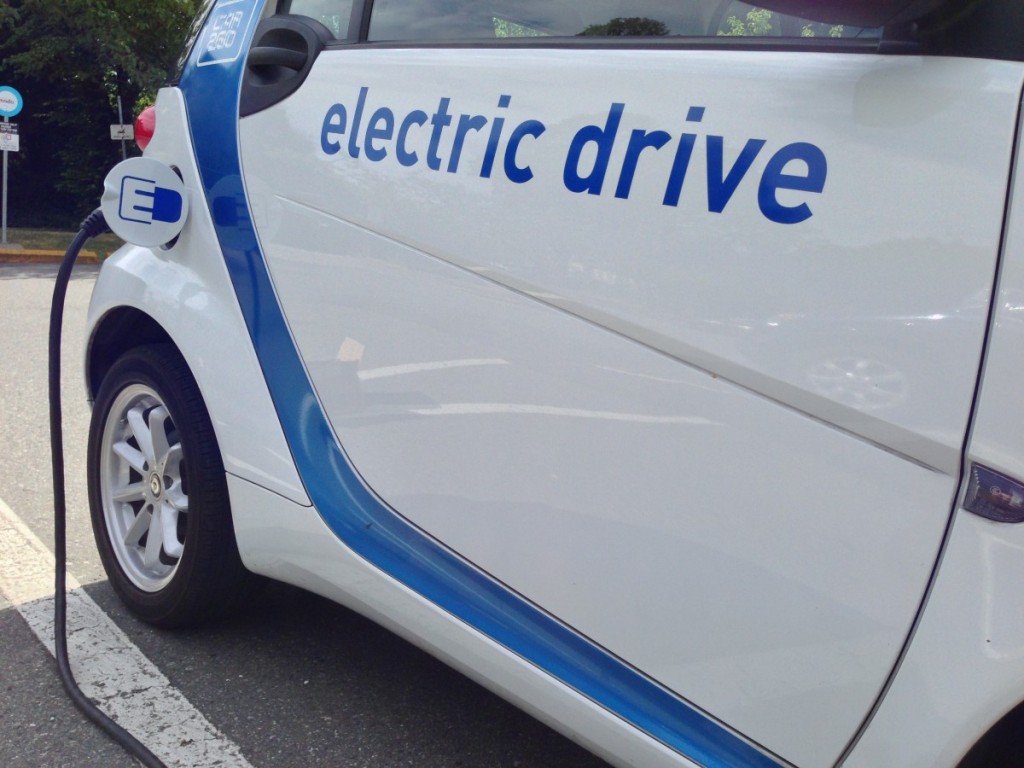 Despite low oil prices, plug-in electric vehicles (EV) are charging forward worldwide, with more than 2 million expected to be on the roads by the end of 2016, according to recent market figures.

The rise in sales is attributed to a growing Chinese market, followed by sales in Europe and the United States, where Tesla Motors Co. is now dominating the luxury sedan market, according to recent reports.

And though EVs are a fraction of the global vehicle stock — less than 1 percent— the industry is growing about 10 times faster than the traditional vehicle market.

“What we have seen over the past few months is a complete culture change.”

This increase could be significant for public health and the environment in the United States and elsewhere. In the United States, transportation is now topping the electricity sector as the largest source of carbon dioxide emissions, a key factor in human-caused climate change.

Moreover, fossil-fuel vehicles are known to be major contributors of air pollution associated with asthma, allergies, cancer, heart conditions, and premature death, according to the United Nations. And while EVs can reduce air pollution in cities, they also mean less oil extraction, which comes with air pollution and environmental issues of its own.

Right now, EVs’ presence is too small to affect fuel consumption and greenhouse gas emissions from the transportation sector, according to a 2016 International Energy Agency (IEA) report. However, the IEA noted this could soon change, with countries like Norway, the Netherlands, and China boldly turning to EVs as they aim to slash emissions in the next few years.

Norway, a small but rich nation, is now leading the world in EVs. One in three new cars sold there is electric, and that proportion is increasing due to tax breaks and investment in charging infrastructure, The Guardian reported. The Netherlands is following closely, since, like Norway, it wants to phase-out fossil-fuel cars within the next decade. According to a Transport & Environment report released Thursday, EV sales in Europe doubled last year to 145,000.

In China, the rise of EVs is noteworthy, too. One in four electric cars sold worldwide is sold in China. “What we have seen over the past few months is a complete culture change,” said Greg Archer, clean vehicles director at Transport & Environment.

This growth is expected to continue around the world. Some studies suggest that by 2030, EVs could account for two-thirds of all cars in wealthy cities like London and Singapore. That is likely to happen thanks to stricter emissions rules, consumer demand, and falling technology costs.

Batteries, a major factor behind high EV costs, are getting 20 percent cheaper every year, according to EV Volumes.

JOSH GOLDMAN, LEAD POLICY ANALYST, CLEAN VEHICLES
View the original article here.
I’m guessing that over the past 3 months (or more), your news feed has been dominated by election-related stories. So you may have missed the recent good news about the electric vehicle (EV) market in the United States. To bring you up to speed (and provide a brief break from election hullaballoo) here are 4 graphs that explain what’s been happening in the world of EVs.

Graph 1 : EV sales are charging ahead (see what I did there?)

The sales increase can be partly attributed to the second generation Chevy Volt, which became widely available in March 2016 and includes 50 miles of electric range along with a backup gasoline engine. Plug-in hybrid electric vehicles (PHEVs) like the Volt allow many drivers to do all of their normal daily driving purely on electricity, without any fear of running out of juice because they can just fill up with gas if the batteries are drained.

EV sales reached this new high-water mark despite spotty availability of EV models across most of the country and continued lower-than-average oil prices, a factor often cited as hampering EV sales.

Low gas prices do take some of the spotlight off of EVs, despite their lower operating costs compared to gas-powered vehicles. But even with gas hovering around $2.30 a gallon, driving on electricity remains cheaper.

The US Department of Energy estimates that driving on electricity is like paying $1.15 per gallon of gas, and electricity prices have historically been much more stable and predictable than gasoline.

Graph 3: Sales would be even higher if they were more widely available

The requirements of the California program are set to expand to 9 additional states (ME, CT, VT, NY, MA, RI, MD, NJ, OR) in 2018, which together made up 28 percent of combined vehicle sales in 2015. So, the expanded role of policy pushing automakers to sell EVs in major vehicle markets outside of California will likely accelerate aggregate EV sales over the next couple years.

Graph 4 : More automakers are getting in the EV game

2017 should be an exciting year for EVs. Chevy is about to drop the Bolt, an all-electric car with over 200 miles of range and a price tag of around $30,000 after the federal tax credit. Toyota is releasing a new Plug-in Prius, now called Prius Prime, and recent pricing announcements put the cost similar to the price of existing Prius models.

Also in 2017, Tesla is aiming to ship their much-anticipated Model 3, and Hyundai will launch their Ioniq series that will include several electric drive train options. In 2018, Audi is slated to launch an all-electric 300-mile range SUV. Check this post for more detail on other EVs coming to showrooms soon.

Overall, more EV options mean more choices for drivers to choose a vehicle that is cheaper and cleaner than a comparable gasoline model (and fun to drive). Though the EV market still has to overcome some hurdles , the state of play right now provides real reason to be optimistic about where EVs are headed.

The company is accused of ignoring its own climate change science for years.

By: Alejandro Dávila Fragoso
View the original article at ThinkProgress. 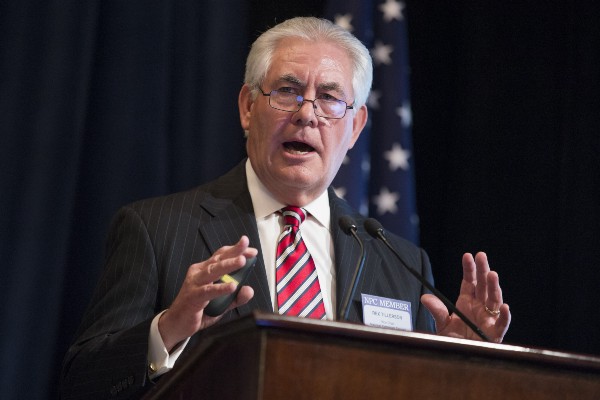 Speaking at the Oil & Money conference in London, Tillerson also noted that the Paris climate accord set to kick in this November is unlikely to limit near-term consumption of oil and gas, Climate Central reported.

“We have long used a proxy cost of carbon… there’s a range depending on the country, depending on the tax that we think would be appropriate,” he said. “We’re trying to influence and inform people and business on the choices they make.”

Tillerson’s comments come amidst accusations that Exxon Mobil, the world’s largest listed oil and gas company, for years ignored company scientists who warned about climate change as early as 1977. The company has also been accused of funding climate science denial groups. Since the story broke in 2015, multiple state attorneys general, led by New York AG Eric Schneiderman, and organizations have subpoenaed the company to give investigators 40 years of documents on research findings and communications about climate change.

Exxon denies the accusations and has even sued some state AGs. On Monday, after almost a year of cooperating, the company sued in a Texas federal court to block the subpoenas from New York and Massachusetts, Inside Climate News reported.

In a news release, Exxon called the New York and Massachusetts investigations “biased attempts to further a political agenda for financial gain.” The company said Schneiderman and others are colluding with anti-oil and gas activists. For more than decade “it has widely and publicly confirmed” the risk of climate change and its potential impacts on society and ecosystems, the company said in the news release.

Organizations like the Union of Concerned Scientists (UCS) dispute that, however. UCS claims that as recently as 2015, Tillerson said the world should improve its understanding of climate science before acting, and that he’s asserted climate models are inaccurate. The advocacy organization also notes Exxon is still associated with the American Legislative Exchange Council (ALEC), a free-market lobbying group that has worked to kill renewable energy programs, and teach climate denial in schools.

On Wednesday, Tillerson avoided the most recent controversy, but said that since 2006, Exxon has been committed to doing the “right thing the right way.”

“Integrity is in everything we do. It’s the foundation of trust and cooperation. A focus on integrity makes a corporations more effective,” he said.