The article below puts a spotlight on the swift growth of electric vehicle use worldwide. So speedy in fact, EV use has tripled since 2013. This is one of the few areas that the world’s nations are on track to keep climate change below 2 degrees celsius. Let this be a reason to keep up the good work with EV deployment, and highlight the other energy initiatives that could use improvement. With every electric vehicle that hits the road, the demand for places to charge up increases. What if I told you there was a way to not only install a charging station, but an independently owned business that can set its own pricing, access settings, and much more? Keep reading to find out…

The rapid growth of electric cars worldwide, in 4 charts 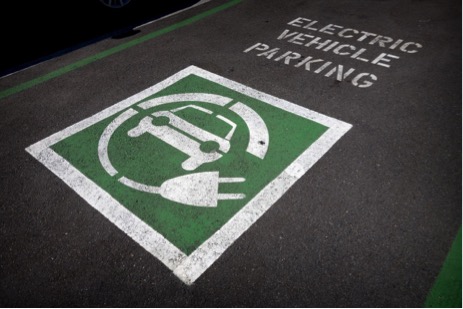 One million down, another billion or so to go.

In a new report, the International Energy Agency estimates that 1.26 million electric cars hit the world’s roads in 2015, passing a nifty (if symbolic) milestone. Here’s a chart showing the very rapid growth of both battery electric vehicles (BEVs) and plug-in hybrids (PHEV):

The United States now has 400,000 electric vehicles on the road — a massive increase since 2010, though well short of Obama’s goal of 1 million by 2015. Meanwhile, China has become the world’s largest market, overtaking the US in annual sales last year.

Is 1 million a lot? It depends how you look at it. It’s jaw-dropping growth given that there were only a few hundred electric vehicles on the entire planet back in 2005. And the total number of electric vehicles worldwide has tripled just since 2013.

But to put this in perspective, there are more than 1 billion gasoline- and diesel-powered cars on the world’s roads — and demand will keep soaring in the decades ahead as China and India’s middle classes expand. So we have a long, long way to go before electric cars take over the world.

In order to avoid more than 2°C of global warming, the IEA calculates, we’d likely need to see about 150 million electric cars on the road by 2030 and 1 billion by 2050 as part of a broader climate strategy. The good news, the agency says, is that this ambitious electric vehicle target seems much more feasible than it did just a few years ago.

For starters, more and more countries are enacting policies to build up charging infrastructure and incentivize vehicle purchases. The table below details some of those policies, which include everything from tax breaks to tailpipe emission standards (which favor cleaner electric cars) to HOV lane access: 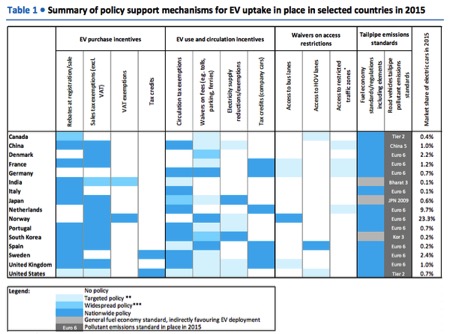 The other huge driver here is falling battery costs, which have fallen by a factor of four since 2008. Since batteries make up around one-third of the price of electric vehicles, getting this number down even further is crucial for widespread adoption. 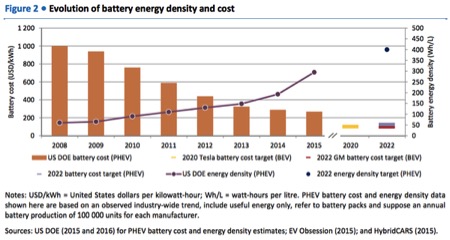 The Department of Energy estimates that battery costs need to fall to $125 per kilowatt-hour by 2022 to achieve cost-competitiveness with conventional vehicles. The IEA says this “seems realistic” given current rates of technological improvement, and points out that manufacturers like Tesla and GM have set even more ambitious cost targets.

The amount of energy that batteries can hold (known as energy density) has also improved significantly. The IEA cites various reports that electric cars will soon be able to travel more than 180 miles on a single charge — also critical for boosting consumer adoption and alleviating “range anxiety.”

Meanwhile, electric cars get all the attention, but the IEA points out that the electrification of other modes of transport, including motorcycles and buses, is just as important. Particularly in countries where these vehicles are widespread:

The electrification of road transport modes other than cars, namely 2-wheelers, buses and freight delivery vehicles, is currently ongoing in a few localised areas. With an estimated stock exceeding 200 million units, China is the global leader in the electric 2-wheelers market and almost the only relevant player globally, primarily because of the restriction on the use of conventional 2- wheelers in several cities to reduce local pollution. China is also leading the global deployment of electric bus fleets, with more than 170 000 buses already circulating today.

To help solve climate change, electric cars need to do much, much more

Here’s one last chart from the IEA, showing what electric car deployment would have to look like to help meet the emissions-reduction promises put forth at the Paris climate talks last year (around 100 million electric cars by 2030). It also shows the even faster deployment that would be needed to keep global warming below 2 degrees Celsius (about 150 million):

We’re on track now, but it’s early. In fact, as the IEA points out elsewhere, electric vehicle deployment is basically the only area where the world’s nations are on track to hit the targets needed to stay below 2 degrees Celsius.

One final caveat: As David Biello recently explained at Scientific American, electric cars aren’t inherently greener than their gasoline-powered counterparts. If you use coal-fired power plants to charge all those electric cars, the climate benefits are minimal (or, worse, negative). The IEA is well aware of this, although it also notes that electric car deployment can help support the rollout of cleaner renewable energy, too:

The climate change-related benefits of EVs can be fully harvested under the condition that their use is coupled with a decarbonised grid, an additional challenge for countries that are largely dependent on fossil fuels for power generation. Investment in EV roll-out can support this transition, e.g. increasing the opportunities available to integrate variable renewable energy.

Cleaning up the grid is a sine qua non for electric cars to help ameliorate climate change, although this hardly seems like a deal breaker for the technology. Think of it this way: If we don’t clean up the world’s electric grid, we have little chance of stopping global warming either way. The two have to go hand in hand.

Following Emerald Skyline’s recently announced partnership with ChargePoint, we have realized more and more the importance of the growth of electric vehicle use worldwide. Equally important as these EVs are the charging stations and infrastructure needed to support them. This rapid growth necessitates installation of charging stations. The industry standard for functionality and aesthetics are ChargePoint stations which are independently owned businesses that set their own pricing, access settings and much more.

To find out more information about the installation of a ChargePoint Electric Vehicle Charging Station at your home, office building, shopping center, hotel or transportation hub and join the EV revolution for a greener tomorrow, please contact us at 305.424.8704 or info@emeraldskyline.com

Emerald Skyline Corporation in conjunction with Golden Spiral Design, is designing, renovating and repurposing an unoccupied industrial building located in Boca Raton, FL. This building was formerly an auto garage that stood vacant for several years and was environmentally contaminated. Our renovation includes many sustainable features with the intent to obtain LEED certification from the USGBC.

The above paragraph still holds true months later. However, we have had to re-think the project scope and move forward on a smaller scale. We spent months working on the design and drawings in preparation for submission as a development project. In our original design concept we envisioned a larger building footprint and a second floor addition. Vision often becomes qualified by reality, and our project is no exception. The property size cannot accommodate a larger building footprint and the FAR (floor area ratio) requirements limit the building size allowed. An addition of a partial second floor (FAR compliant) was our solution to the lot size and FAR restrictions. Although only a partial second floor was now being considered it would still require stairs and ideally an elevator. Also, the limited first floor square footage available to accommodate the new stairs and an elevator almost negated the second floor addition. Our conclusion was that adding the partial second floor was not adding the square footage desired, and the cost of construction and engineering did not make economic sense.

In January we made the decision to proceed with the project as a renovation of the existing building only. No additional square footage is being added. Our intent is to repair and replace what is there. The building will visually retain the auto garage industrial look but will be transformed into a sustainable, repurposed space.   As a sustainable consulting firm, it makes sense for us to not increase the size of the building. Our society often believes that bigger is better and we briefly fell into this way of thinking. Now we are committed to working within a limited space and we are re-focusing on creative design and the best use of that space.

As stated in our previous post, this project is a proposed LEED certified building. A key component of a LEED project is its reduced energy use. We have replaced the existing flat roof which was old and leaking with a new roof that has a high SRI (Solar Reflectance Index). We are also designing a high efficiency HVAC system and building envelope to optimize the energy performance of the building. All of the existing windows are being replaced with product that exceeds the Florida Code and are High Velocity, Hurricane Zone approved for Miami-Dade as our project is located in South Florida. In addition, to optimize energy performance in a hot climate our windows have a high VT (visible transmittance) and low SHGC (solar heat gain coefficient) to ensure adequate daylight is being admitted while still blocking significant quantities of solar radiant heat gain. 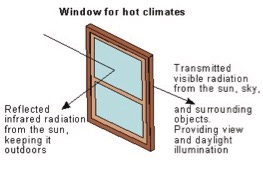 LED lighting fixtures designed with specific task usage will be installed on both the interior and exterior of the building. The existing concrete floors of the auto garage are going to be polished and used as they are. The specifications of the interior finishes are just beginning and as an interior designer, this is the fun part. Low VOC products, adequate air ventilation, and controlled air temperature and humidity will be utilized to protect the buildings IAQ (Indoor Air Quality). Low flow toilets and faucets, and Energy Star appliances will all be specified to reduce the amount of water and energy that is consumed.

We hope to be in our new location by early fall. Once our building is completed we will post descriptions of the renovation details and photos. This project has been a long journey. We are proud that it is a shining example of a correct decision to repurpose a building that might have otherwise been overlooked.