Solar power is growing faster than any other renewable energy in the world, according to new research by the IEA. But where in the world is the technology booming the most? 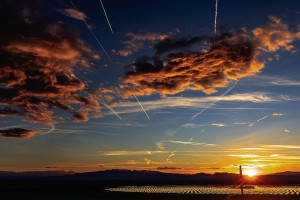 Solar is growing at speed in several states, including Utah, Arizona, and Nevada, and looks set to continue this trend through this year and beyond.

In 2016, solar power was the fastest growing source of new energy globally, accounting for up to two thirds of new power capacity added, according to the International Energy Agency (IEA). This was in part due to China embracing the technology, which represented half of all new solar panels.

The dramatic increase has allowed the IEA to raise its predictions of renewable capacity growth by 12% from 2015, and the agency advises that growth could potentially reach 27% if enhanced policies addressing regulatory uncertainties and grid integration are implemented.

Falling prices and government policies are the main reasons for the increase, but why has solar taken off more quickly in some countries and states than in others?

Australia has an awesome solar resource, which it has only recently begun to take advantage of with analysts predicting that solar energy capacity in Australia could double this year alone. In January, 111MW of new rooftop solar panels were installed, a 69% increase from last year. Meanwhile, 30 industrial-scale solar power plants are scheduled to come online throughout the year with more projects due to be approved.

These large-scale projects are expected to add 2.5GW and 3.5GW to the Australian grid, while rooftop solar will add around 1.3GW. These will vastly increase the percentage of solar in the energy mix, with current resources at just 7GW. The solar boom is expected to grow further, as prices continue to drop and it becomes more accessible.

This boom has also been supported by Tesla’s 100MW battery in South Australia. The technology has been extremely successful, responding to power outages in milliseconds during the summer and easing power demand.

China has had one of the most dramatic switches to renewable energy. From 2013 more than half of China’s capacity additions have been from renewable or nuclear sources, as the country tries to reduce its reliance on coal and tackle air pollution.

Today, China has the biggest solar market in the world after adding 34GW of power in 2016, double the amount added in the US. It is also home to the leading solar power farm at present, Longyangxia Dam Solar Park, along with a major floating solar plant, located in Huainan, Anhui Province.

This is only the start, with investments in greater and better projects seemingly unending and 8MW of solar already added in the first quarter of this year. However, despite huge growth, solar still only accounts for 1% of China’s energy mix, with 66% still met by coal. By 2050, this is expected to be a vastly different picture with some government predictions suggesting that 86% of demand will be met by renewables, and a third of that made up of solar.

The US sees steady progress

Following the election of President Trump, many industry experts were sceptical about the role renewables would play in the US energy sector, due to his policies favouring coal and natural gas, and suggestions of redistributing funds away from environmental technologies.

But solar installation has continued to boom throughout America, as mature markets such as California, which boasts 18,296MW of solar, have slowed while younger markets in the middle of the country are continuing to grow. Solar is growing at speed in some states, including Utah, Arizona and Nevada, and looks set to continue this trend through this year and beyond.

This is predominantly due to the dramatic reduction in the cost of solar, which has fallen by as much as 85% since 2009. The drop has made solar installations cost competitive with natural gas in many of the sunnier states.

In March, a vast solar project was launched in Pavagada, southern India. When completed the plant could well be the largest solar project to date as it will span 13 acres and produce 2,000MW – enough to power 700,000 households. This is just one of many new super-sized solar projects that are springing up throughout the sub-continent.

India’s energy transition has been almost as dramatic as China’s, overtaking Japan in 2017 to become the third-biggest market for solar power. Prime Minister Narendra Modi is aiming to reach 100GW of solar energy capacity by 2022, which would be thirty times as much as in 2015.

The country has ambitious goals, and with its quickly growing economy and large percentage of the population still living without power, solar has a lot of potential in India. It currently accounts for about 5% of the energy mix, but 14 solar parks have already been approved for construction and 22GW of solar power are expected to be added to the grid by the end of this year.

Germany has the greatest solar power capacity of any European country, boasting 40.9GW in 2016 and with plans to continue to build its solar fleet. While Germany is more commonly associated with wind power, solar is expected to continue playing a significant part in the country’s Energiewende, or ‘energy turnaround’.

Germany is pursuing an increasingly diversified energy sector with increases in technologies such as wind and solar allowing it to run off of 85% renewable for a day in April 2017. The country is aiming to fulfil about 200GW of energy demand with solar in the future, with annual instillations of 6GW-7GW required to meet this target. If this is achieved, however, Germany could become 100% reliant on renewable energies for its power.

Despite its small size in comparison to many of the other solar success stories, as of 2016 Japan had an impressive 38.7GW of solar power capacity. Following the meltdown at the Fukushima Daiichi plant and the resultant shutdown of the majority of its nuclear power plants, Japan has become increasingly focused on renewable energy to ensure it will not remain reliant on expensive fossil fuel imports.

This drive towards renewables has led to several new solar projects, increasing the share of solar in Japan’s energy mix to 4.3% by 2016. It is currently the fourth-biggest solar market and despite being overtaken by India continues to boom. In March, the largest floating solar plant in the world officially opened in Japan. The Yamakura Dam reservoir in Chiba Prefecture has a capacity of 13.7MW and was a joint venture between Kyocera and Tokyo Century, an organisation established in 2012 to promote the construction of major solar projects in Japan.

While northern African countries have steamed ahead with solar technologies, in particular concentrated solar power (CSP), sub-Saharan countries have struggled to make the most of the vast resource. But this is slowly changing, with projects both big and small popping up across the continent helping bring reliable and sustainable energy to more people.

South Africa is one of the many countries that has thrown its weight behind renewables, predominantly wind and solar. It has now committed to an Integrated Resource Plan to diversify and strengthen its energy mix between 2010 and 2030 , which includes the goal to achieve 9,600MW of solar power capacity.

Already there are a number of large solar plants in South Africa, such as the KaXu Solar One plant near Pofadder in the Northern Cape Province of South Africa. The 100MW CSP plant produces enough power to supply 80,000 homes and offset 315,000t of CO2 emissions a year.

As of 2016, solar power was providing 1MW of power to the national grid in South Africa. This has already helped improve the notoriously unreliable power supply, and is set to improve it further over the coming years as the resource plan is implemented.

Ta’u in America Samoa became 100% reliant on solar power for electricity in 2016. The idyllic island uses 5,000 solar panels and 60 Tesla solar packs to provide a reliable and clean source of power to its 600 residents.

Ta’u is one of a few island nations around the world taking advantage of renewables, including Tokelau, a set of three tiny islands between New Zealand and Hawaii which has also made the switch. Islands such as these are some of the most at risk from rising sea levels caused by climate change, a sure encouragement for many to make these dramatic shifts to reduce their CO2 emissions.

Ta’u’s diesel supply was often affected by bad weather, leaving generators short and electricity unreliable. For years, the main island in American Samoa Tutuila has had to subsidise shipments of 100,000 gallons of diesel, costing as much as $400,000 a year.

It took two years to construct the microgrid on Ta’u, and despite some struggles getting it up and running, it has been a success. Although Ta’u is only small, it is an example of solar success and is being used as a pilot project for the rest of American Samoa, which is aiming to transfer to 100% solar power by 2040.

May 1, 2018 from Emerald Skyline Corporation

Today, Emerald Skyline announced that it will develop land located in southern Arizona for the purpose of solar generation and electricity storage technology research. The project, Emerald City Solar, recognizes that both solar generation and electricity storage technologies are rapidly evolving and will continue to become more cost effective. The southern Arizona project will include research and development facilities to continue to evaluate new technologies as they emerge. It is expected that the total generation of the solar farm will continue to increase along with the value per kilowatt hour of the electricity generated as new technologies are deployed. Emerald Skyline believes the future of renewable energy is in the storage technology and will be exploring novel ways of delivering and storing energy. They have assembled a world-class team to conduct research and development to drive innovation and advanced sustainable technologies to manage surplus renewable power for use on demand and supply of power.

The site of the solar farm development enjoys the best solar profile in the United States and is near major urban centers including San Diego, Los Angeles, and Phoenix. The electricity generated could be sold to the local electric power utility company at prevailing Power Purchase Agreement rates of about .07 per kilowatt hour (KwH). However, through the use of proven electric storage technology, the value of the electricity could be significantly increased through the selling into the power grid during peak demand periods at much higher spot market prices. Selling power in this manner is called Regulation Services.

Deployment of electricity storage is increasing at explosive rates and has been described by the Edison Electric Institute (EEI) as a game changer in the industry. Several new companies can provide large battery-based storage units and have the operating systems required to interact with the electricity grid. Through storing electricity and injecting the stored power into the grid during peak demand periods the cost of peaking power can be greatly reduced. By selling power into the grid during peak demand at much higher prices the value of the solar power farm can be greatly enhanced.

“As a sustainability and resiliency consulting and LEED project management firm, this partnership enables us to collaborate with a host of industry partners to not only produce energy but also to test and demonstrate the benefits of solar energy storage technologies. When electricity storage is not available, excess solar electricity is wasted. When storage is installed, the excess energy can be saved and subsequently used to reduce the use of a fossil fuel,” reports Abraham Wien, LEED AP O+M, Director of Architecture & Environmental Design for Emerald Skyline.

To find out more information about Emerald City Solar or electricity generated from renewable sources such as solar and the current development in electrical energy storage technologies for a greener tomorrow, please contact Abraham Wien at aw@emeraldskyline.com or call us 305.424.8704.