By: Tina Casey on Triple Pundit

Retail giant Amazon made waves with its recent forays into the entertainment field. And now it looks like the sprawling enterprise is about to pull the rug out from under hydrogen fuel cell skeptics.

Last week the company signed a deal with fuel cell innovator Plug Power for a new generation of zero-emission, hydrogen-powered electric forklifts and other equipment at its fulfillment centers.

Warehouse operations aren’t the most exciting sector in the auto industry, but the new Amazon forklift deal could make a big difference for the future of fuel cell electric cars. That market has been slow to take off, but the Amazon announcement adds momentum to the trend, helping to keep investors and auto manufacturers interested in pushing the technology forward.

Fuel cell vehicles run on electricity, like the now-familiar battery electric vehicles. Both types of EV emit no air pollutants. The main difference is that fuel cells generate electricity on-the-go through a chemical reaction. Battery EVs run on stored electricity.

That difference looms large in warehouse operations, where excess fat shaved from time and space translates into big bottom-line savings.

Battery-powered forklifts require relatively long charging times, and extra storage space for battery charging. In contrast, fuel cell forklifts can be fueled up in a matter of minutes, like an ordinary gas-powered vehicle, and they don’t require a “battery room” or other excess storage.

Hydrogen fuel cell forklifts have already begun to establish a solid track record in the logistics sector, and it looks like Amazon didn’t take much convincing.

The recent deal enables the company to acquire more than 55 million common shares in Plug Power in connection with a $600 million commitment from Amazon to purchase goods and services from Plug Power.

This could be just the beginning…

Amazon and Plug Power plan on a relatively modest start for the new venture, with a total of $70 million in buys this year for fuel cell equipment at selected fulfillment centers.

What’s really interesting about the deal is the “and services” part of the agreement. Forklifts appear to be just the start of a wide-ranging collaboration between the two companies, leading to other applications.

“This agreement is a tremendous opportunity for Plug Power to further innovate and grow while helping to support the work Amazon does to pick, pack and ship customer orders. … Our hydrogen fuel cell technology, comprehensive service network, and commitment to providing cost-savings for customers has enabled Plug Power to become a trusted partner to many in the industry and we are excited to begin working with Amazon.”

To put this in perspective, consider that just a few years ago it was difficult to get investors interested in fuel cell technology. The hydrogen economy dream was hitting a harsh reality — namely that the technology was not quite ready for prime time. Growing competition from battery-powered EVs also helped to shove hydrogen fuel cells down the ladder.

TriplePundit’s RP Siegel interviewed Marsh about the fuel cell dilemma in 2012, and the CEO made these observations about Plug Power, forklifts and the future of fuel cell EVs:

“With limited capital, we had to be selective in our decisions about which markets to go after. … The one that really jumped out at us was replacing batteries in fork lift trucks with fuel cells. How big of a market could that be? Well, in the US there are over 1.5 million forklift trucks, and worldwide, the number is 6 million.

“We chose this market because it was a way to build a profitable business that would allow us to attract large customers in a relatively large market … as we continue to drive down our costs, we should be at parity with IC [internal combustion] engines in five to six years, at which point we’ll be ready to expand into other areas.”

With the new Amazon partnership, it looks like Plug Power is hitting that five- to six-year timeline for growing into other areas.

Just a wild guess, but in a few years you could see Amazon introduce its own fuel cell EV for street use.

That may seem far-fetched, but consider that Google began dabbling in the related field of self-driving cars in 2015 and is now a burgeoning leader in the space. (That project has since been transferred to Google’s parent company, Alphabet.)

Apple is also inching into the self-driving car market.

Intel is another tech company putting feelers into the self-driving sector. Just last month it took a giant step with a $15.3 billion acquisition of the Israeli startup MobilEye.

Amazon will have to act fast if it wants to catch the train. Mainstream auto manufacturers are beginning to add fuel cell EVs to their rosters at a quickening pace.

Toyota was among the first to make a firm commitment to the field with its fuel cell Mirai. The company’s efforts include the all-important transition to sustainable hydrogen and support for growing the network of hydrogen fuel stations, along with a foray into the forklift sector.

Other companies introducing fuel cell EVs to the consumer market include GM and Honda.

In response to the Amazon fuel cell forklift news, last week MIT Technology Review pumped out a brief article with this observation about the consumer market:

“Attempts to convince the public to embrace hydrogen-powered cars have flopped. While some automakers continue to push on with the vehicles, other are increasingly having second thoughts.”

On the brighter side, last December the journal IEEE Spectrum took an in-depth look at the potential for the fuel cell EV market to bust loose, penned by the director of the National Fuel Cell Research Center at the University of California, Irvine.

The article emphasized that both battery and fuel cell EVs will have a place in the zero-emission market of tomorrow, but fuel cells will give batteries a run for the money based on a number of advantages including range and refueling time.

That growing market could provide an important incentive for investors to accelerate the pace of renewable energy development.

One installer offers his thoughts on why, and what works. 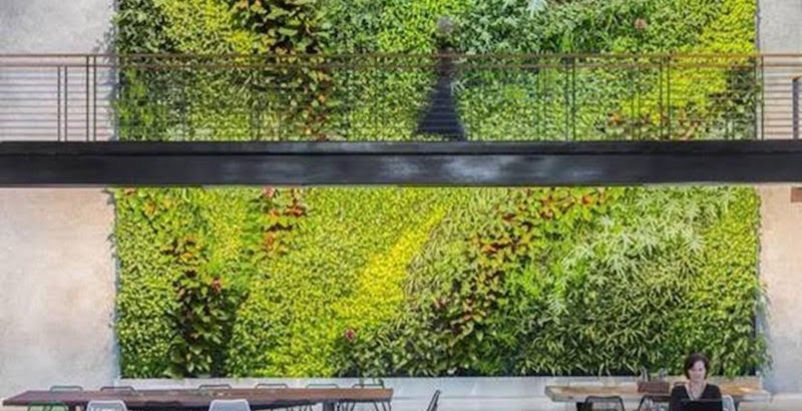 Improving air quality and reducing stress are two things that more businesses and homeowners want from their working and living environments. Plant walls can answer both of those calls, and are becoming more common in the built environment.

For example, a syndicated article posted this week reports on plant walls that were installed in Goodyear’s headquarters in Akron, Ohio. Another reports on a tech startup in Minneapolis, When I Work, whose lobby features a plant wall and big windows. Inhabitat’s website includes recent stories on “plant paintings,” indoor moss walls, and a “nature filled” office in The Netherlands.

Plant walls are so pervasive, in fact, “they are almost passé,” quips David Brenner, the 32-year-old founding principal and lead designer for San Francisco-based company Habitat Horticulture, which has been enlivening interior spaces with plant walls since 2010.

This year, Habitat Horticulture is on track to install 35 commercial plant walls and 15 residential walls, both numbers slightly up from 2016.

The benefits of plant walls are numerous: they provide cooling through a combination of shading, evapotranspiration (the water in a plant’s roots that evaporates through its leaves), and surface reflectivity. They bring nature into environmentally hostile urban areas, and serve as interior air filtration systems. They absorb sound. And the presence of plant walls has been shown to enhance worker productivity.

Brenner, who while attending California Polytechnic University studied horticultural science and psychology, accepts the research that finds a cause-and-effect relationship between plant walls and stress relief. He also believes that plant walls can be “restorative” to people exposed to them on a regular basis.

Brenner’s first exposure to plant walls was during an apprenticeship at the Royal Botanic Gardens in London. He started experimenting with “going vertically” with plants in 2007 when one of his college professors gave him access to a 30- by 20-foot greenhouse on campus.

“It’s surprising what you can grow on a wall,” says Brenner. But some plants are more conducive to living walls than others. Evergreen perennials such as geraniums, heuchera, and fuchsia are the best species because, he explains, they stay green, keep their leaves throughout the year, and tend to hug or compact against the wall. “They make for a good base or backdrop.”

Herbaceous perennial species, on the other hand, are not ideal, he continues, because they tend to lose their leaves in in winter. Brenner also stays away from plants that get “woody or stemmy” over time for his backdrops, as they tend to come off the wall. These are better used as accent plants for dimension, but not as the wall base.

Like any garden, the success or failure of a plant wall usually comes down to designing for performance within a specific micro climate, and the integrity of the wall’s irrigation system. And if a client wants a low-maintenance wall, that will limit which plants can used.

More important is the integrity of a wall’s irrigation system.

Habitat Horticulture is a full-service provider. It prepares detailed shop drawings that integrate the plant wall into the site’s architectural plans, and outline his company’s scope of work. His firm helps clients select the plant palette and composition (depending on the installation, panels are pregrown off-site or are planted on-site), builds the framework for the wall, commissions the controls for irrigation/fertigation and lighting, and installs and waterproofs the wall system and irrigation/circulation systems.

The only thing its associates and subs don’t handle is electrical and plumbing.

It also trains key personnel and management in ongoing maintenance and operations. (Most of Habitat Horticulture’s installations are followed up with weekly or monthly maintenance schedules.)

Plant walls aren’t that heavy; about 8 pounds per sf planted and irrigated. They can cost anywhere from $100 to $175 per sf, depending on the complexity of the system. That cost typically includes water recapture, and measuring pH levels, labor, and structural requirements. 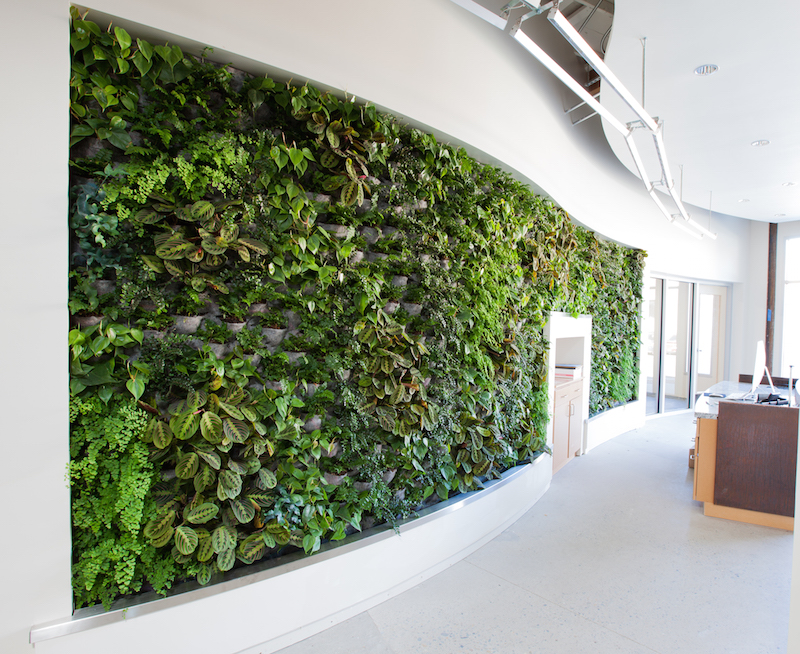 Clients sometimes turn to living walls as part of their strategy for their buildings to earn green certifications. For example, one of Brenner’s clients, the architectural design firm Architectural Nexus, renovated its new office in Sacramento to meet standards of the the Living Building Challenge Certification. A critical component of that building’s water filtration function is its living wall, which is irrigated by greywater repurposed from showers and sinks on-site. The wall can be viewed from all desk spaces throughout the office and from the street.

Four years ago, Habitat Horticulture installed three large plant wall and a living wine bar (live plants beneath a glass bar top) into DPR Construction’s office, which was the first certified net-zero energy building in San Francisco. Clover Payments, a payments software startup whose office is in a net-zero energy building that formerly was a racquetball facility, boasts a 30-ft-wide by 22-ft-high living wall that Habitat Horticulture installed in 2015, which helps provide cleaner air circulation for tenants.

More recently, Habitat Horticulture put in a plant wall at the main entrance of Westfield UTC, an open-air shopping mall in San Diego that is undergoing a $600 million renovation and expansion that will add 90 stories and 215,000 sf of retail space.

Healthcare could be Habitat Horticulture’s next frontier. Its portfolio includes a women’s health center. And Brenner says that some hospitals have “reached out” about adding a plant wall to their facilities. “Their biggest concern is infection control,” which he says can be managed by filters, testing and—to be on the safe side—injecting chlorine into the system.