They’re taking responsibility for their effect on people and the environment. 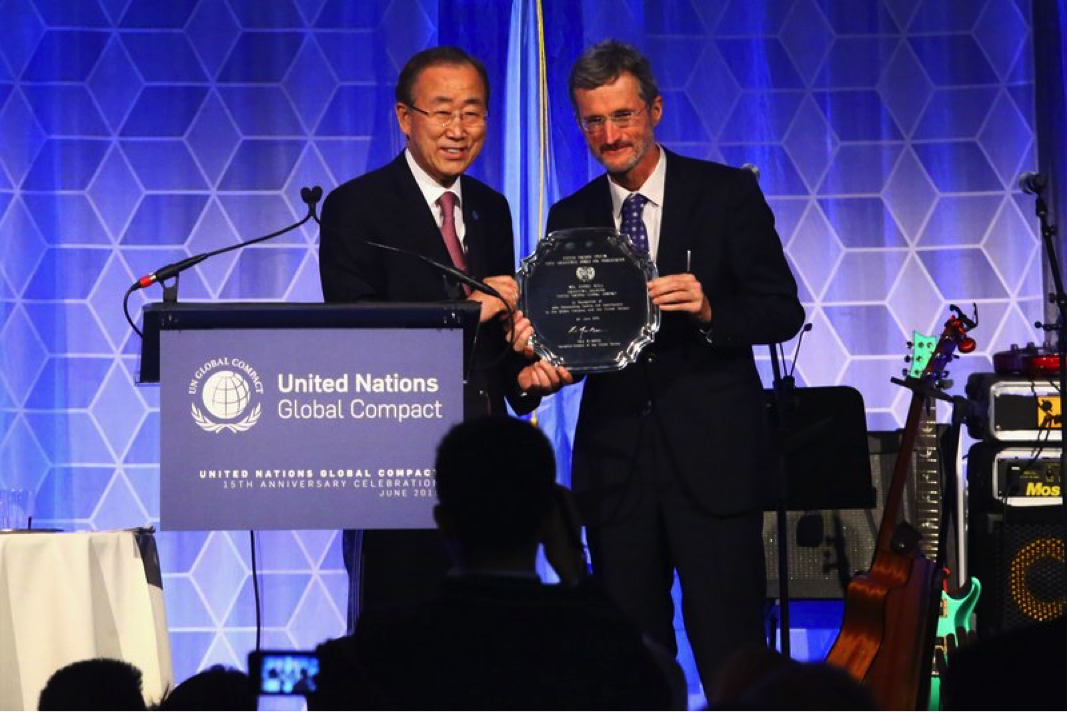 Evidence is mounting to show that the frequency and ferocity of extreme weather events is intensifying on a global scale. From severe droughts to powerful storms, we are living in an increasingly changeable, uncertain, and unpredictable world.

You don’t have to believe in climate change to accept this new reality. Resilience and the ability to manage challenges impacting us and our environment are of far greater importance to both business and society. Take the recent destructive hurricanes in the U.S. and the Caribbean, or the devastating floods in Nepal, India, and Bangladesh that represent a stark example of this new reality and of our growing vulnerability.

The role of business within this new reality is changing. Businesses have a critical role to play in helping solve the challenges we face through providing services and solutions that support society. In fact, businesses that do not adapt their models run the risk of eroding trust and ultimately, forfeiting customer loyalty.

Uncertainty in the world—from extreme events, to declining natural resources, to the changing skills required for employment—gives forward-thinking C-suite leaders an opportunity to adopt conscious capitalism through the incorporation of key elements like trust, collaboration, and stakeholder orientation into day-to-day business practices. And, as consumers increasingly demand that their brands reflect these objectives, companies that want to remain competitive will need to adapt by joining the circular economy.

At its most basic, the circular economy replaces the current wasteful linear economic model. Instead of organizations relying on finite resources, they conduct sustainable business. They find renewable resources. They remove waste at every stage, from sourcing to recycling—creating a business model that restores and regenerates, rather than depletes and throws away. They look at how products are made, who makes them, and where, as well as how those same products are recycled or sustainably retired. In fact, adopting a circular economy model is not simply about products and services but also the way we do business as companies. It presents an opportunity to move beyond simply meeting sustainability standards to a solution that transforms the current model of business and one that can create a competitive advantage for the leaders.

Leading companies are still innovating, but now in a way that takes responsibility for their effect on people, the environment, and the state of our world. And they have realized that—contrary to popular belief—doing so can still be profitable. Accenture research shows a potential $4.5 trillion reward for achieving sustainable businesses by 2030. And a number of companies are already making progress toward this aim.

Rubicon Global, for instance, a pioneering U.S.-based waste management company that connects customers directly with independent waste haulers, is disrupting the current waste disposal model to reduce waste to landfill, while passing on $1 million in savings to its clients across 80,000 locations.

Nike, another leading example, is rapidly transitioning toward its closed-loop vision with a bold target for FY2020: zero waste from contract footwear manufacturing going to landfill or incineration without energy recovery. To date, 70% of all Nike (NKE, -0.43%) footwear and apparel incorporates recycled materials, using 29 high-performance, closed-loop materials made from factory scraps.

As the circular economy and conscious capitalism take hold, the C-suite is taking note: 64% of UN Global Compact CEOs say sustainability issues play a central role in their strategic planning and business development, while 59% of CEOs report that their company can accurately quantify the business value created through their sustainability initiatives, up from 38% in 2013.

The circular economy, a critical aspect of this change, is already happening—so much so that the World Economic Forum Young Global Leaders, in collaboration with Accenture Strategy and in partnership with Fortune, recognize leaders through The Circulars, the world’s leading circular economy award program. The Circulars, presented each year at the World Economic Forum Annual Meeting in Davos, attracts entries from individuals and organizations across business and civil society, from global giants such as Unilever to innovative startups such as Method. A winner at The Circulars in 2015, Method was built on wholly circular and sustainable principles, ensuring 75% of its products are cradle-to-cradle certified, meaning they are designed and produced in a socially and environmentally responsible way. Method has eliminated countless toxic chemicals from homes by using natural inputs.

These are just a few examples of organizations driving value through circular economy innovation—there are many more. In a world in which conscious capitalism is becoming mainstream, the circular economy has a significant role to play in enabling businesses to make the transition whilst continuing to deliver value to customers, shareholders, and society. As more businesses take the lead, the opportunity that the circular economy represents will become a reality.

Projects like these, where resilience is central to their design and construction, are becoming more commonplace. 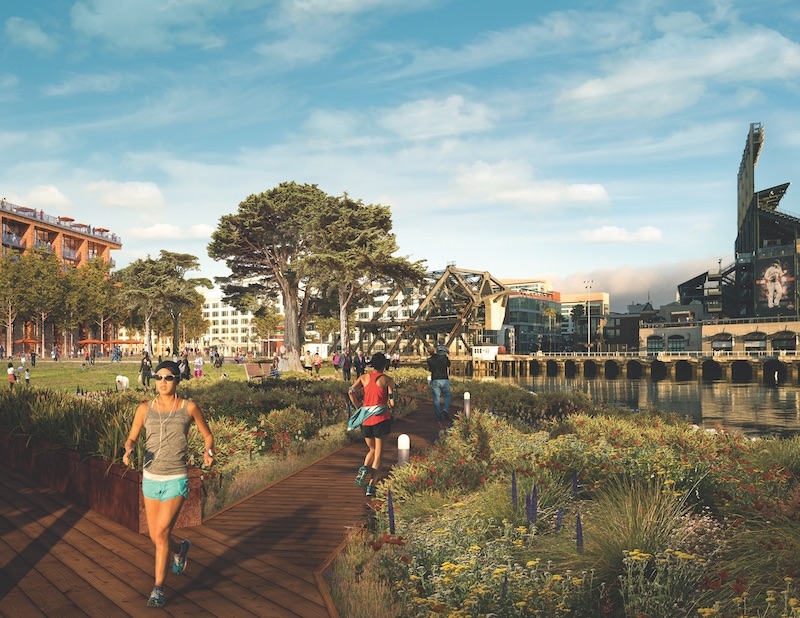 Perkins+Will has written the design controls for the redevelopment of a 28-acre surface parking lot in San Francisco into a mixed-use waterfront community called Mission Rock, which would have a mesa running through it to handle sea levels that are projected to rise as high as 66 inches by 2100, compared to 24 inches today. Courtesy Perkins+Will.

On July 28, the New Jersey Department of Environmental Protection awarded AECOM and a team that includes OMA, Magnusson Klemencic Associates, and Matrix New World Engineering the final design contract for a resilience project along the Hudson River. The primary goal is to reduce flooding in Hoboken, which has 2.3 miles of coastal exposure, and parts of Weehawken and Jersey City.

The approach of this project, which HUD awarded $230 million through its Rebuild by Design contest, has four integrated resilience components:

Skidmore, Owings & Merrill, which is working on a separate project to redevelop Hoboken’s Terminal and Rail Yard into a mixed-use transit-oriented community with more than $100 million in improvements, is coordinating its efforts with the Rebuild by Design team, whose study area encompasses the terminal/rail yard.

Projects like these, where resilience is central to their design and construction, are becoming more commonplace, as developers and their AEC teams adopt positive measures to give their property assets a fighting chance of surviving the ravages of natural disasters, and to minimize recovery costs.

The replacement Ocosta Elementary School in Westport, Wash., which opened in the fall of 2016, offers a safe haven of refuge to students and residents who would have less than 30 minutes to evacuate in the event of a tsunami. The 23-classroom school includes the first vertical shelter in North America, a rooftop evacuation platform 53 feet above sea level that’s accessible via four flanking stair towers enclosed in concrete.

The platform, which is anchored by concrete piles that extend 55 feet into the ground, can hold more than 1,000 people and withstand a 9.2-magnitude earthquake and the impact of incoming waves. Resilience accounted for $2 million of the school’s $16 million project cost.

Three-thousand miles to the east, a seven-acre site with 1,700 lineal feet of shoreline along East Boston’s waterfront is being transformed into Clippership Wharf, a mixed-used development that will have 478 apartment units on two finger piers. Owner/developer Lendlease took over this project from a previous developer that had planned for lots of surface and underground parking. “That’s just not right for this day and age,” says Nick Iselin, Leadlease’s General Manager of Development. Lendlease rewrote the plan with several resilience measures, including replacing old seawalls that had been part of the site’s industrial infrastructure.

Lendlease is converting one of the piers into a “living shoreline” by creating a series of terraces for new salt marshes and a habitat for Boston Harbor, which is subject to a 10-foot tidal influence. The first floor of each building will be 24 feet above Boston City Base. All infrastructure and mechanical systems will be located above the 100-year flood level. Garage levels will be flood resistant.

To meet Boston’s “Living with Water” ordinance, Lendlease created a 1,400-foot Harbor Walk that will be 14-16 feet above the water level. In all, Clippership Wharf will have 189,830 sf of open space.

Back on the West Coast, there’s a 28-acre parking lot south of AT&T Park, where the San Francisco Giants play, that is subject to sea levels that vary as much as 24 inches. Predictions estimate those levels could rise to 66 inches by 2100.

“We needed to manage that risk,” says Kristen Hall, LEED AP, Senior Urban Designer with Perkins+Will, which has written the design controls for the proposed mixed-used redevelopment of this waterfront site, called Mission Rock. Eventually, it will encompass 11 city blocks and include eight acres of parkland, 1,500 rental units, and a million sf of office space. The Giants and the Port of San Francisco are co-developers.

The design, Hall explains, calls for the creation of a mesa down the middle of the site, with minimal frontages that may flood. She calls these frontages the site’s “sacrificial edges.” Other edges will include loading docks that create redundant elevated building access, as the majority of Mission Rock’s buildings would be at higher elevations. The park area would use a series of grade changes as design features, such as an amphitheater, a sloped lawn, steps, and ramps.

In July, the first phase of the Cornell Tech applied science campus was completed on Roosevelt Island in New York City’s East River. That phase includes The House, a residential complex with 350 apartments for staff and faculty, and Bloomberg Center, a four-story, academic building.

The buildout of this 12.4-acre, $2 billion campus is expected to proceed through 2043 and expand to two million sf. SOM, in collaboration with Cornell University and Technion – Israel Institute of Technology, is the project’s master planner. Resilience is key to protecting this property.

Colin Koop, AIA, SOM’s Design Director, explains that the East River is a tidal estuary, and significant portions of the site lie within 100- and 500-year floodplains. So all of the architecture needs to be elevated. The main pedestrian walkway, called Techwalk, will allow people to enter the campus at its periphery and then rise gently through its open spaces at a slope that is largely imperceptible. Once they reach the central ridge, they would be surrounded by permeable façades “that help create a synergy between inside and outside spaces on campus,” he says.

Cornell, says Koop, has been a “sophisticated client that is grappling with realities larger than itself and this project.”