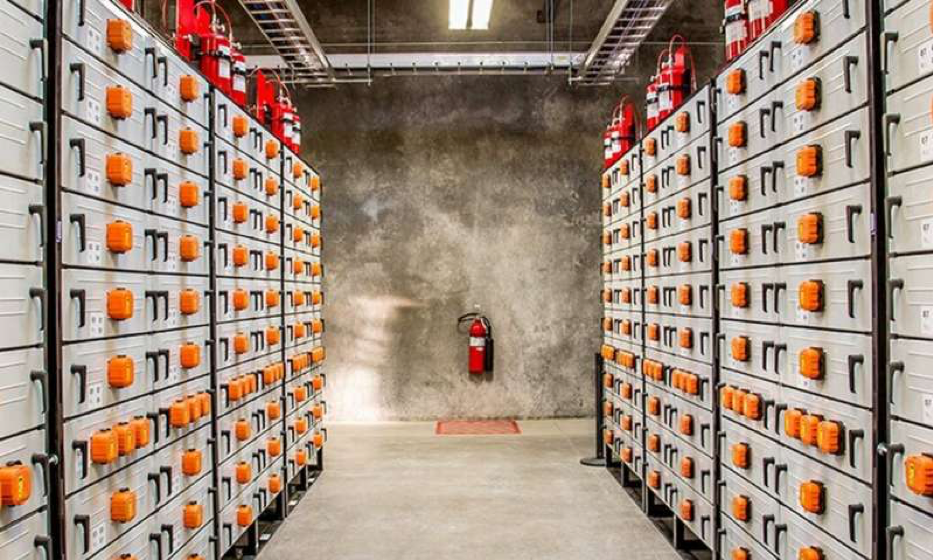 This is what a 5-megawatt, lithium-ion energy storage system looks like. Credit: Pacific Northwest National Laboratory

Due to their decreasing costs, lithium-ion batteries now dominate a range of applications including electric vehicles, computers and consumer electronics.

You might only think about energy storagewhen your laptop or cellphone are running out of juice, but utilities can plug bigger versions into the electric grid. And thanks to rapidly declining lithium-ion battery prices, using energy storage to stretch electricity generation capacity.

Based on our research on energy storage costs and performance in North Carolina, and our analysis of the potential role energy storage could play within the coming years, we believe that utilities should prepare for the advent of cheap grid-scale batteries and develop flexible, long-term plans that will save consumers money.

The amount of electricity consumers use varies according to the time of day and between weekdays and weekends, as well as seasonally and annually as everyone goes about their business.

Those variations can be huge.

For example, the times when consumers use the most electricity in many regions is nearly double the average amount of power they typically consume. Utilities often meet peak demand by building power plants that run on natural gas, due to their lower construction costs and ability to operate when they are needed. 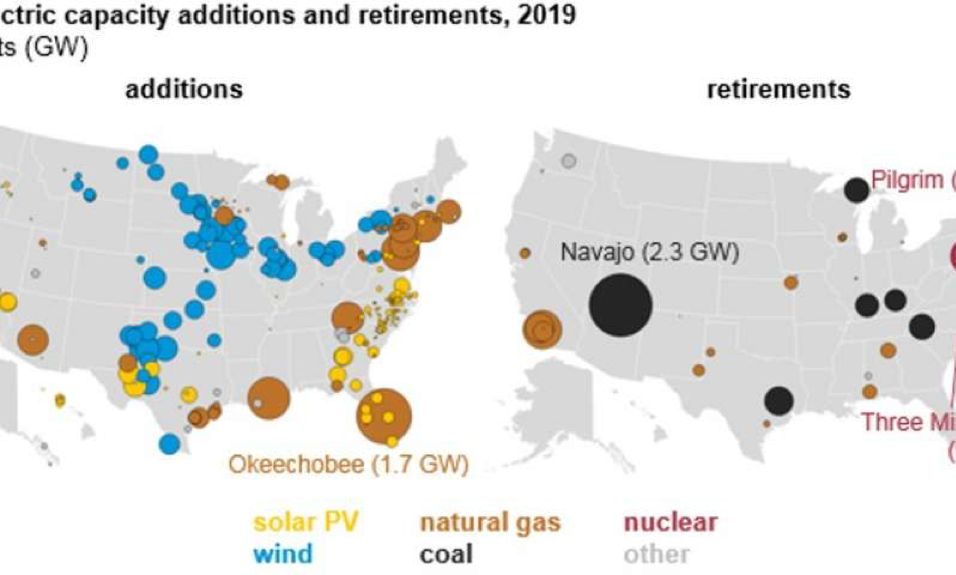 All of the new utility-scale electricity capacity coming online in the U.S. in 2019 will be generated through natural gas, wind and solar power as coal, nuclear and some gas plants close. Credit: U.S. Energy Information Administration

However, it’s expensive and inefficient to build these power plants just to meet demand in those peak hours. It’s like purchasing a large van that you will only use for the three days a year when your brother and his three kids visit.

The grid requires power supplied right when it is needed, and usage varies considerably throughout the day. When grid-connected batteries help supply enough electricity to meet demand, utilities don’t have to build as many power plants and transmission lines.

Given how long this infrastructure lasts and how rapidly battery costs are dropping, utilities now face new long-term planning challenges.

About half of the new generation capacity built in the U.S. annually since 2014 has come from solar, wind or other renewable sources. Natural gas plants make up the much of the rest but in the future, that industry may need to compete with energy storage for market share.

In practice, we can see how the pace of natural gas-fired power plant construction might slow down in response to this new alternative. 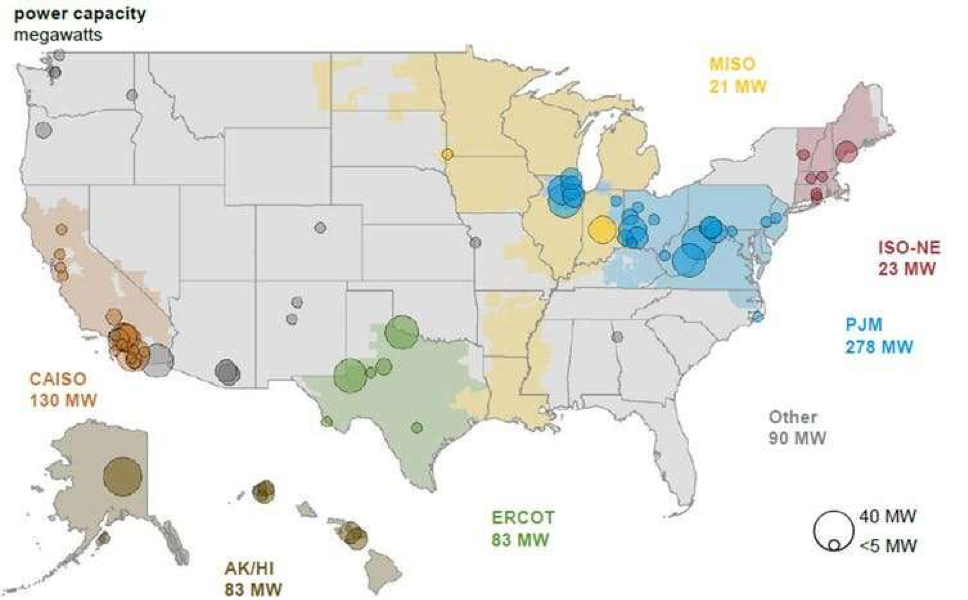 So far, utilities have only installed the equivalent of one or two traditional power plants in grid-scale lithium-ion battery projects, all since 2015. But across California, Texas, the Midwest and New England, these devices are benefiting the overall grid by improving operations and bridging gaps when consumers need more power than usual.

Based on our own experience tracking lithium-ion battery costs, we see the potential for these batteries to be deployed at a far larger scale and disrupt the energy business.

When we were given approximately one year to conduct a study on the benefits and costs of energy storage in North Carolina, keeping up with the pace of technological advances and increasing affordability was a struggle.

Projected battery costs changed so significantly from the beginning to the end of our project that we found ourselves rushing at the end to update our analysis.

Once utilities can easily take advantage of these huge batteries, they will not need as much new power-generation capacity to meet peak demand. 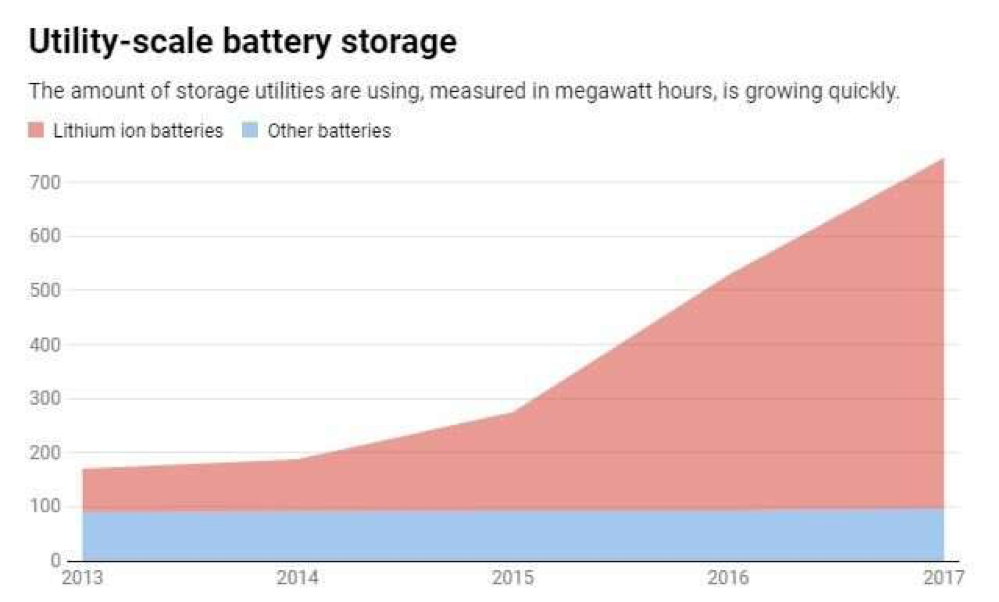 Even before batteries could be used for large-scale energy storage, it was hard for utilities to make long-term plans due to uncertainty about what to expect in the future.

For example, most energy experts did not anticipate the dramatic decline in natural gas prices due to the spread of hydraulic fracturing, or fracking, starting about a decade ago – or the incentive that it would provide utilities to phase out coal-fired power plants.

In recent years, solar energy and wind power costs have dropped far faster than expected, also displacing coal – and in some cases natural gas – as a source of energy for electricity generation.

Something we learned during our storage study is illustrative.

We found that lithium ion batteries at 2019 prices were a bit too expensive in North Carolina to compete with natural gas peaker plants – the natural gas plants used occasionally when electricity demand spikes. However, when we modeled projected 2030 battery prices, energy storage proved to be the more cost-effective option. 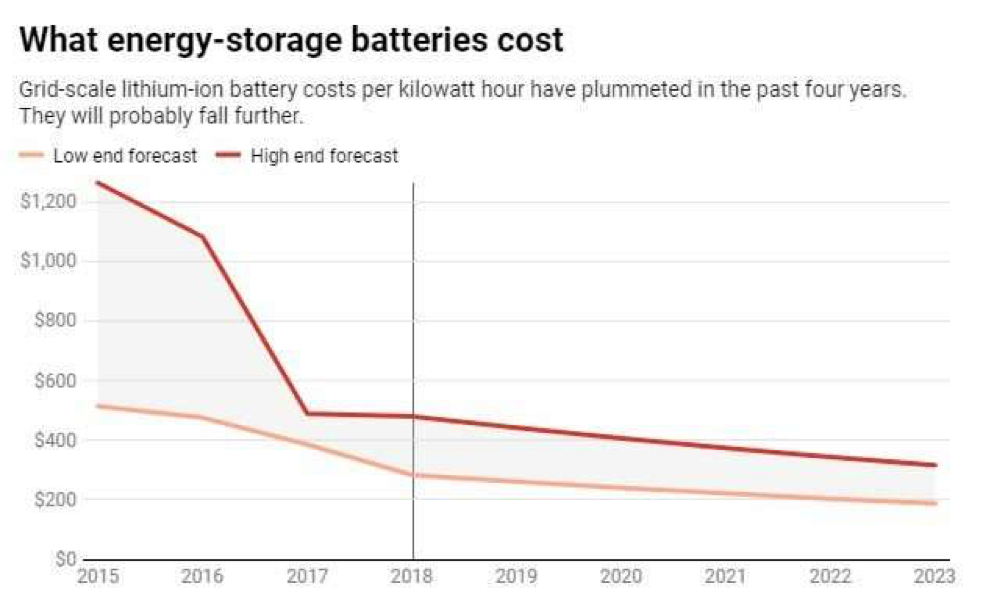 Federal, state and even some local policies are another wild card. For example, Democratic lawmakers have outlined the Green New Deal, an ambitious plan that could rapidly address climate change and income inequality at the same time.

And no matter what happens in Congress, the increasingly frequent bouts of extreme weather hitting the U.S. are also expensive for utilities. Droughts reduce hydropower output and heatwaves make electricity usage spike.

California utility Pacific Gas & Electric, for example, got permission from regulators to build a massive 567.5 megawatt energy-storage battery system near San Francisco, although the utility’s bankruptcy could complicate the project.

Hawaiian Electric Company is seeking approval for projects that would establish several hundred megawatts of energy storage across the islands. And Arizona Public Service and Puerto Rico Electric Power Authority are looking into storage options as well.

We believe these and other decisions will reverberate for decades to come.If utilities miscalculate and spend billions on power plants it turns out they won’t need instead of investing in energy storage, their customers could pay more than they should to keep the lights through the middle of this century.

A new report by the Energy Information Administration projects U.S. installed battery storage capacity will reach 2.5 GW by 2023. Florida and New York are set to pave the way as massive projects in each state will account for almost half the coming capacity.

Storage is ready to take off in a big way. Image: Tesla

Symbiosis is one of life’s most beautiful phenomena. Certain things just work perfectly together and the energy revolution is no different, as renewable energy resources and battery storage go together like peas in a pod.

However, the United States has an operating battery storage capacity of only 899 MW to date. And while that figure is expected to reach 1 GW this year that would still only represent 1/67th of the nation’s cumulative solar generation capacity, and an even smaller percentage of the overall renewables capacity.

That could all be about to change dramatically though, as the U.S. Energy Information Administration(EIA) has released a report predicting battery storage capacity will almost treble by 2023, to 2.5 GW. 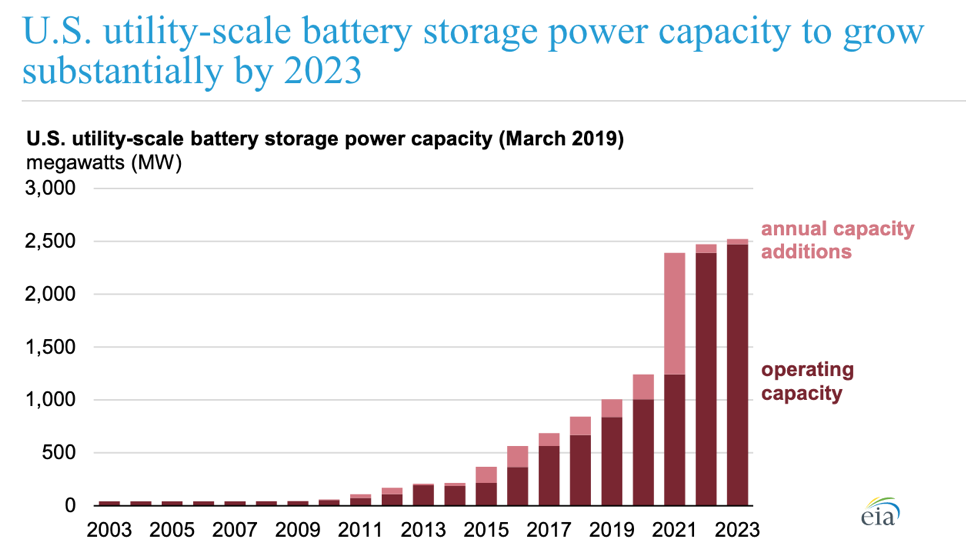 The projections were made based on proposed utility scale battery storage projects scheduled for initial commercial operation within five years. The EIA tracks data with its Preliminary Monthly Electric Generator Inventory survey, which updates the status of projects scheduled to come online within 12 months.

As drastic as a prediction of 2.5 GW appears, there is a precedent. Between late 2014 and March, installed battery storage capacity rose more than four times over, from 214 to 889 MW.

A look at the states that brought the U.S. to its current storage reality offers surprising results. Leading the way was California, unsurprisingly. However, of the six states known to pv magazine to have energy storage mandates, California is the only one in the top 10 for installed capacity. The others: Arizona, Nevada, New York, Massachusetts and Oregon; each have less than 50 MW of installed battery storage capacity.

Texas, Illinois and Hawaii are relatively unsurprising storage pioneers as all three states have strong solar industries and Hawaii especially has been pushing battery storage deployment. Right away, however, the names that stand out on the list are West Virginia, Pennsylvania and Ohio. None of those is known as a solar pioneer; they have just under 650 MW of generation capacity installed between them. Special recognition goes to West Virginia on that score, with its 8.5 MW.

So what’s with all the storage? Independent of renewables West Virginia, Pennsylvania and Ohio – plus New Jersey, the seventh state on the list – are all members of the PJM Interconnection. PJM was the first large market for battery storage, and uses the technology for frequency regulation.

The first of those is Florida Power and Light’s (FPL) planned battery system for its Manatee Solar Energy Center in Parrish. The battery is set to clock in at 409 MW, which would make it the largest solar powered battery system in the world.

In that project’s shadow, but nevertheless considerable is the Helix Ravenswood facility, planned in Queens, New York. Almost more impressive than the project’s anticipated 316 MW of capacity is the idea of having a storage project of such magnitude in NYC.

FPL’s Manatee battery is anticipated to begin commercial operation in 2021, as is the first stage of Helix Ravenswood. That initial phase in New York will represent 129 MW of capacity, with the remaining 187 MW following via a 98 MW second phase and 89 MW final stage. The anticipated commercial operation dates of those expansions have not yet been announced.

We have seen the future and there are batteries, lots of them, demonstrating symbiosis extends beyond the natural world.