As solar and heat pump prices fall, these highly energy-efficient homes are paying for themselves faster. Here’s how they work and why they’re spreading northward. 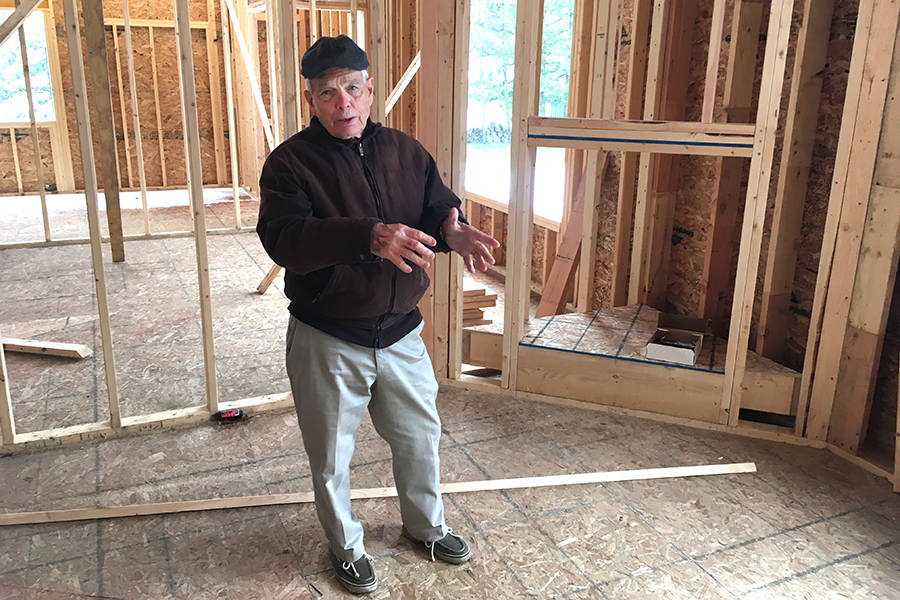 Home-builder Bill Decker explains some of the techniques used to create highly energy-efficient homes in chilly southeast Michigan. New research shows that the extra cost of making a home net-zero energy can pay for itself in under a decade in Detroit and 11.4 years in Chicago. Credit: Dan Gearino

He shifts from carpentry to electrical engineering, and then to theology—his belief that his faith compels him to take care of the earth. Every few minutes, he pauses and points out a house his family-owned company has built.

He has been in business since 1981 and only now is his industry beginning to grasp something he has been arguing for a while: Net-zero-energy homes—homes that are so efficient a few rooftop solar panels can produce all the electricity the home needs—can be built almost anywhere, even in places with brutal winters.

His case is bolstered by a recent report from the Rocky Mountain Institute showing net-zero energy houses can make financial sense in much of the Midwest as costs for some of the key components fall. The initial extra costs of making a new home a net-zero energy home pay for themselves through energy savings in less than a decade in both Detroit and Columbus, Ohio, and in less than 14 years in most of the 50 largest U.S. cities, the report says.

At the forefront are custom builders who specialize in efficient houses and helped to create this market, people like Decker, 79, whose southeastern Michigan company, Decker Homes, is just across the state line from Toledo, Ohio.

Indeed, housing is responsible for about 20 percent of U.S. greenhouse gas emissions, including its share of power plant emissions.

Yet his sales pitch is largely about comfort. An energy efficient house doesn’t have chilly drafts, and the temperature varies little from room to room, and those are things that appeal to most people, he says.

‘It’s the Little Things that Add Up’

Decker parks on the dirt driveway of a house in progress as a light rain turns to snow flurries. In a living room that is studs and bare wood floors, he notes the features that make this house highly energy efficient. The key is making insulation an essential part of construction.

Decker walks to the corner of the room and points out an opening of several inches between studs to allow for easy placement of insulation. Builders call this a “California corner,” which is an alternative to a typical corner design that is much more difficult to insulate.

“It’s little things that add up,” he says. 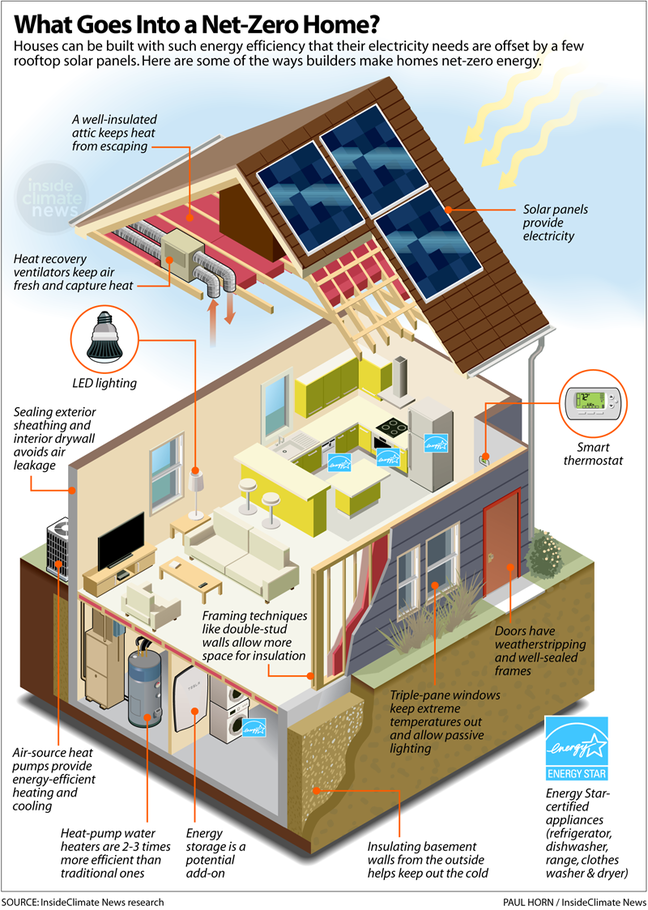 Their designs often take natural lighting into account, too, and position windows and overhangs for additional solar heating in the winter and shade in summer. Since the homes are sealed to avoid letting cold or hot air in—and cool or warm air out—they also have ventilation systems customized to maintain comfortable circulation.

Decker recently completed his first house with an air-source heat pump, which is less expensive than geothermal heat or other electric options. In cold weather, the system extracts heat from the outside air and uses it to maintain a comfortable indoor temperature. In warm weather, the process is reversed, with the system gathering heat from inside and transferring it outside.

He is starting to use air-source systems because newer models work well in below-freezing temperatures, which was not the case just a few years ago. Heat pump advancements are one of the main factors making highly efficient homes more affordable in many colder climates.

This is in addition to a cost factor that affects all climates: Rooftop solar prices have plummeted in recent years and are projected to continue doing so. That is true of battery power storage as well.

In Detroit, Net-Zero Pays for Itself in 9 Years

The costs and benefits of building net-zero houses vary widely in major cities, ranging from San Francisco, where the benefits would cover the costs in eight years, to Philadelphia, where it would take about three times as long, according to the Rocky Mountain Institute.

The largest savings tend to be in cities with high electricity rates and older building codes. 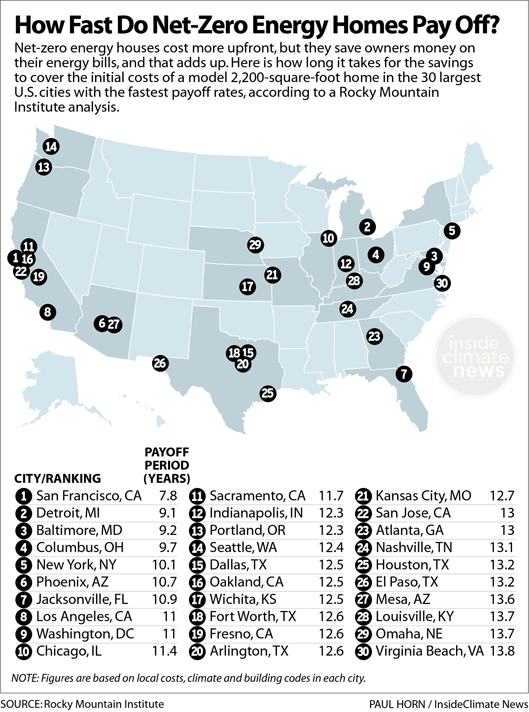 The key point is that energy efficiency pays for itself, which is not the case for many other major expenses in a house, said Jacob Corvidae, principal at Rocky Mountain Institute, a research nonprofit that focuses on clean energy.

“Zero-energy homes are actually affordable,” he said. This is important because many consumers, builders and policymakers are reluctant to consider zero-energy homes because of the perception that costs are prohibitive, he said.

In Detroit, for example, a 2,200-square-foot net-zero energy house would cost $19,753 more than the same house with no solar and typical efficiency. The energy-bill savings would be $2,508 in the first year, and the solar and efficiency costs would pay for themselves in about nine years with inflation and other changes taken into account. 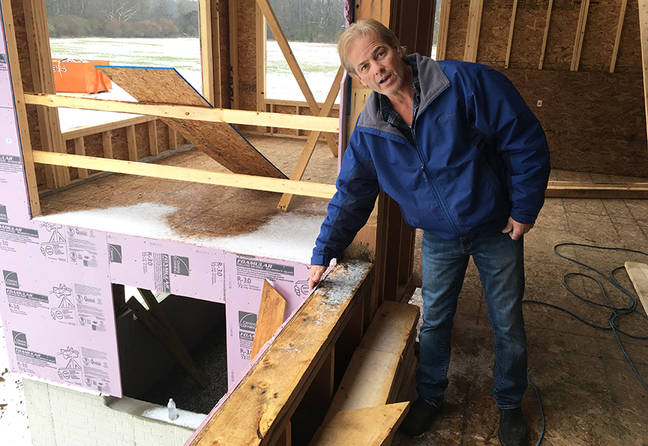 The Midwest is well represented among cities with short payoff periods. Detroit is second in the report. Columbus ranks fourth, with a payoff of less than 10 years. Chicago ranks 10th and Indianapolis is 12th, with payoffs of about 11 years and 12 years, respectively.

A home with all the energy efficiency attributes of a net-zero energy house but not the solar panels will save customers money even more quickly, the report notes, though it doesn’t provide all of the climate benefits. In Detroit, a “net-zero-energy ready” house without solar would cost $1,574 more than a typical house and would pay for itself in less than two years. After that, the investment means hundreds of dollars in savings for the homeowner every year.

Net-zero energy homes are a fraction of 1 percent of new housing being built, but their share is growing. Builders completed 13,906 net-zero housing units last year in the United States and Canada, a 70 percent increase from the prior year, according to a report by the nonprofit Net-Zero Energy Coalition.

California was the leader with more than 5,000 units, five times more than runner-up Arizona, where the Rocky Mountain Institute report shows net-zero homes in Phoenix can cover their costs in 11 years.

California’s lead is likely to grow because of a state building code update that takes effect in 2020 and will require solar panels on most new housing and have strict efficiency standards, the first state to do so. The code falls short of a mandate for net-zero energy housing, but it comes close.

Meanwhile, some of the country’s largest home builders, such as PulteGroup and Meritage Homes, are taking steps to offer net-zero energy options. In Cortez, Florida, Pearl Homes is building a zero-energy community that also incorporates energy storage and electric vehicle chargers.

The corporate moves are tied to consumer demand and because energy efficiency is becoming more affordable, said Ann Edminster, a consultant and architect who works with the Net-Zero Energy Coalition.

“We’re starting to see the tip of that iceberg, and when it really hits, it’s going to be huge,” she said.

Bill Decker thinks many more people would want an energy efficient house if they only had someone to explain the benefits. In his part of the world, that someone is him.

“It’s creating value, saving money, helping the environment,” he said. “In the end, you say to yourself, ‘Why would you do anything else?'”