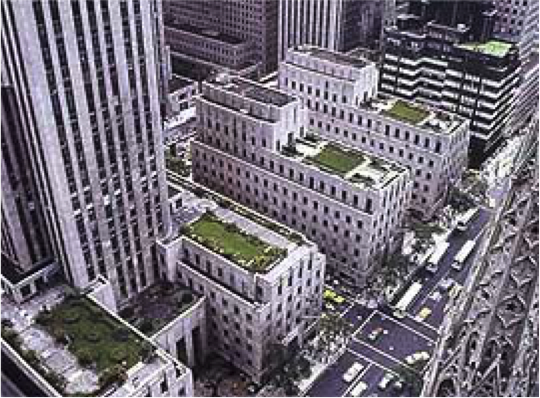 On a hot summer day when it is 90º on the street, it can be twice as hot on the roof of most commercial buildings with a significant number of them made of black tar. Black roofs result in higher utility bills due to the higher HVAC costs. An alternative that is increasingly available is a “green” roof.

Further, green roofs can provide useable outdoor patio spaces which, according to a an article entitled “10 Most Wanted Office Amenities” in the 9/3/2015 National Real Estate Investor, is the seventh most desired amenity based on a survey conducted by Colliers International Group Inc.

A green roof is built like traditional roofs except a final layer of vegetation and soil, or a growing medium, is planted over a waterproofing membrane. Additional layers, such as a root barrier and drainage and irrigation systems may also be included.

According to the GSA Green Roof Report green roofs consist of a waterproofing membrane, growing medium (soil), and vegetation (plants) overlying a traditional roof. Green roofs are used to achieve environmental benefits including reducing storm water runoff, energy use, and the heat island effect. They are sometimes referred to as vegetated roofs or eco-roofs.

The history of green roofs started in ancient Mesopotamia where rooftop plants were grown from the Ziggurat of Nanna to the fabled Hanging Gardens of Babylon, one of the Seven Wonders of the World. The most recognizable green roofs in America were installed on Rockefeller Center in New York City. They continue to flourish today (see photo). More recent examples are the Gap Headquarters in San Bruno, CA and the Ford Motor Co. headquarters in Dearborn, MI.

Green roofs can be either “Intensive” or “Extensive.” Intensive roofs have thick soil depths with elaborate plantings that include shrubs and trees that require heavy load-bearing roof structures and regular maintenance. Extensive green roofs are mush lighter with shallow soils with low-growing ground cover plants that are extremely sun and drought tolerant. Extensive green roofs can be installed over various roof decks and require periodic maintenance.

The environmental benefits of a well-designed and well-maintained Green Roof are summarized as follows:

Green roofs can earn LEED points in several credit categories. The total points achieved will depend upon the size of the roof and the degree to which various features are incorporated into the overall building design. These include but are not limited to storm water design, reduced heat island effect, habitat provided for wildlife, reduced cooling load, and many others. Green roofs help to reclaim green space and promote biodiversity.

LEED is a rating system developed by the U.S. Green Building Council (USGBC). It provides a standard certification process with five key areas of human and environmental health. It provides a roadmap to measuring and documenting success for every building type and phase of building lifecycle. LEED certification is achieved by earning points for a variety of credits.

Of the five major LEED categories and subcategories, below are the ones that have potential to earn credit from a green roof

Summary of the Benefits of a Green Roof

In addition to reduced utility costs, the benefits of a green roof include: (a) reduction of water runoff; (b) reduced sewage system loads by assimilating large amounts of rainwater (3” to 5” of soil absorbs 75% of rain events that are on-half inch or less); (c) protects the underlying roof material by eliminating exposure to UV radiation and extreme temperature fluctuations resulting in a longer lasting roof system. Other benefits include reduction of air and noise pollution, creation of urban living environments for birds, provision of useable outdoor patio spaces, as previously mentioned, and enhancement of a property’s marketability (especially when multiple elevations are incorporated into a project resulting in views overlooking other rooftops).

Up-front costs of an extensive roof in the US starts around $8 psf all-in. By comparison, a traditional roof starts at $1.25 with cool roof membranes starting at $1.50 psf. However, the additional installation costs are off-set by energy savings and the extended life of the roof and possible savings on the storm water infrastructure.   Finally, a property with a green roof will be more marketable to prospective tenants.

The benefits of a green roof are innumerable for building owners and occupants, the built environment, and the natural environment. Green roofs are a primary example of the advances in environmentally friendly systems that are available to enhance your commercial properties.