Emerald Skyline Corporation in conjunction with Golden Spiral Design, is designing, renovating and repurposing an unoccupied industrial building located in Boca Raton, FL. This distinctive commercial building will include many sustainable features with the intent to obtain LEED certification from the USGBC. 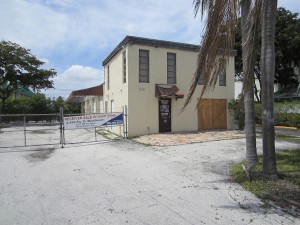 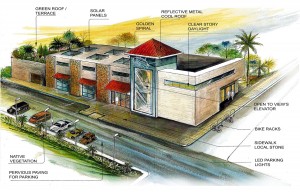 We have been busy working on the design and drawings in preparation for submission to the City of Boca Raton Development Services Department. The design of the building has taken many twists and turns over the last few months. Since we are doing a major renovation and constructing a second floor, the design and location of the stairs and an elevator have been instrumental in our building’s design. As with any project, the site plan and its setbacks limit the building footprint that will be utilized.

Based on our site plan, we do have the space to bump the front of the building out to accommodate our new staircase. This allows us to construct the stairs without having to penetrate the existing building ceiling membrane. In addition, it creates an interesting design element that does not deduct precious square footage for the stairs construction.

We have also decided to locate the elevator on the outside of the building. Again, an exterior location will not deduct square footage from the base building plan. Since the elevator shaft will be located on the exterior, building fire codes will be different than if the elevator was located internally. We are anticipating that the elevator will be a prominent design feature and contribute to the aesthetics of our project.

As stated in our previous post, this project is a proposed LEED certified building. A key component of a LEED project is its reduced energy use. Our initial design utilized solar rooftop panels to generate power for the building even with the hopes of generating enough power to sell back to the grid. Florida’s large utility monopolies and lawmakers have worked successfully to block and control who can generate solar energy and what it can be used for; thereby restricting its use by homeowners and businesses. The Florida legislature, at the direction of the utility companies, have gutted the state’s energy savings goals and entirely eliminated Florida’s solar-rebate program. Due to this situation, we are now exploring alternative methods of energy including fuel cell technology powered by natural gas.

There is a pro-solar group in Florida, Floridians for Solar Choice, that is seeking to make solar more accessible in the state. Their ballot petition seeks to expand solar choice by allowing customers the option to power their homes or businesses with solar power and chose who provides it to them. Please visit their website to learn about this initiative and sign the petition. www.FLsolarchoice.org.

I live in Miami – it is my home. The other night I was watching the weather forecast. The August full moon, a “super” moon, was on Sunday. The forecaster gave us the news that the weather was going to continue to being in the mid-90s with afternoon thunder storms – summer in Miami, no news there (NOTE: All of the record high monthly record temperatures in Miami have been recorded since 1971). However, the forecaster continued to advise viewers who live on Miami Beach and other low-level areas that they may need their rubber boots in order to get to their cars in parking lots and to watch for flooding along the roadways….This is a fairly recent phenomenon – but one that is going to be a part of the forecast for years to come.

It has been a year since Rolling Stone published its article entitled “Goodbye, Miami” written by James Goodell (7/4/2013 Read more:  http://www.rollingstone.com/politics/news/why-the-city-of-miami-is-doomed-to-drown-20130620?page=3#ixzz3A6oXVFId).

When the article was first published, most of Miami’s leaders scoffed at the article and the idea that Miami may not exist in 100 years. Perhaps it was the publication in which it was published or wishful thinking, but most of Miami’s (and Florida’s) business and political leaders decided to stick their head in the sand and ignore the increasing number of days in which our streets are flooded.

As reflected in numerous studies and many reports and articles, the world is warming. It does not really matter if it is natural or man-made – the facts are the facts – and this one will not be ignored for long. Along with the warming of the earth’s surface is a rising of the sea level resulting from both the melting of the ice caps and the expansion of the water as it warms….It has already risen almost one foot in the past century – and the pace at which it is rising is hastening.

Predictions are that the sea level will rise by two feet within 35 years and by up to one foot per decade thereafter – until the earth’s temperature stabilizes. At these levels – and with no actions put into place – Mr. Goodell’s prediction will surely come true.

The implications are immense: According to the report, Risky Business: The Economic Risks of Climate change in the United States, produced by the Risky Business Project led by former New York Mayor Michael Bloomberg and published in June:

“In Florida, because of porous limestone on which the major southern cities were build, even modest sea level rise comes at significant economic cost. Under current projections, between $15 billion and $23 billion (in today’s dollars) of existing property will likely be underwater by 2050, a number that grows to between $53 billion and $208 billion by the end of the century…An additional $240 billion in property will likely be at risk during high tide that is not at risk today.”

The impact of rising sea levels goes beyond flooded streets and imminent threat to property – and the impacts will grow exponentially as the sea rises and our leaders and citizenry remain immobilized – whether out of denial, ignorance or apathy.

Miami especially is vulnerable because of our low ground level (one quarter of Miami-Dade County is at less than 3′ above sea level) and our porous limestone plateau which Glenn Landers, senior engineer at the US Army Corps of Engineers likens to a block of Swiss cheese in Mr. Goodels’ article. A good analogy for the ground on which Miami (and all of South Florida) is built; but troublesome in the development of global solutions.

To its credit, Miami Beach has started to build pumping stations to reduce flooding – but this is only a stop-gap measure AND is being contested by home owners who feel it reduces the value of their property. This Stormwater Master Plan began with $206 million budget which is estimated to be half of the actual monies needed. The City is starting to raise fees and rates in order to pay for this program.

According to information in the website Sea Level Rise America, (www.slramerica.org), “Property owners of all types including developers, need to understand sea level rise issues and adaptation strategies. Those seeking to sell their properties will have to disclose to potential purchasers that their real property will be impacted by sea level rise and possibly higher taxes imposed by governments seeking to update public infrastructure projects such as storm sewers. Such adaptation projects will be necessary, but some will be controversial.”

SLR America identifies 26 legal and financial implications of rising sea levels on coastal communities – and many of these implications need to be addressed NOW: For instance, let’s take the disclosures in real property sales. “Simply stated, residential (and commercial) property purchasers in sea level rise threatened zones need informed notice and protection.” Just like sellers and real estate agents must disclose hazards due to asbestos and radon and lead-based paint, in order for sellers to be protected from future claims, property sales in 2013, when sea level rise is a known scientific fact, need to be accompanied by the disclosure of the potential impacts of sea level rise on the property.

We are not under water – yet! Last year, the Miami-Dade County Commissioners created a Sea Level Rise Task Force which issued its report on July 1st (Available here: http://www.miamidade.gov/planning/boards-sea-level-rise.asp) and provided six recommendations to the Commissioners. It is important that the real estate and business leaders support these recommendations and encourage the County government to dedicate the resources necessary to create and implement a plan that results in the survival of our fair City.

Meanwhile, building owners and managers can start now to make their properties more sustainable – which includes the ability to withstand increasingly harsh and violent storms with greater flooding from storm surge.

I have lived in tornado zones and earthquake zones and hurricane zones. The true benefit of living in a hurricane zone is that you have 3 – 7 days of advance notice. In those days, we prepare – we buy supplies and protect our properties against the coming storm.   With climate change and the sea level rise, we are given just 40 years to prepare – it is time to start make our preparations – the weather forecast is not changing any time soon.

If you work at the new 600 Brickell office tower in downtown Miami, you don’t have to take a car or walk a block to grab lunch. One of the building’s features is a large golf cart that shuttles people to popular lunch spots.
The idea is part of the building’s green image because it stops people from firing up their gas-guzzlers just to make a short trip. But it’s also a nice amenity.

It’s a benefit offered by the new king of green among Miami’s environmentally friendly office buildings. The first LEED Platinum-certified office tower in Florida is so far living up to its ranking, the U.S. Green Building Council’s highest rating of a building’s sustainability.

Loretta Cockrum, chairwoman and CEO of Foram Group, developer of 600 Brickell, isn’t shy about the benefit to her and her company.
“Our leasing is at a record pace, and we are getting the highest rates in the market,” she said in a recent interview. “I think tenants who are looking for this type of building recognize the Platinum level of quality.”
For example, Cockrum recently signed Northern Trust Bank to relocate to the building. The bank said the LEED Platinum rating was an important factor in the decision.

“The decision was influenced by 600 Brickell’s infrastructure and amenities, including an internationally certified information technology security system, expandable IT capacity and a green environment that benefits the health and well-being our employees,” said John Fumagalli, president of the bank’s Florida operations, in a news release.
‘It just makes sense’

Getting the USGBC’s highest certification was important to Cockrum, but building quality was more important, she said.
“Forget about LEED; it just makes sense,” Cockrum said. “If someone said to you, ‘I can save you 3 million gallons of water a year for X number of dollars,’ would you do it? I said, ‘Why wouldn’t I?’” Cockrum says she is surprised such standards are not required for all buildings.

“We are diverting 3 million gallons of water a year from the city’s systems,” Cockrum said. “If you believe fresh water may be a precious commodity, think about how important that will be. But you can’t renovate a building to have that. It has to be built that way.”

Based on her experience, the most valuable feature for occupants is the quality of air and light in the building. Many studies have shown fewer sick days in LEED-certified buildings, and Cockrum said her company has noticed that impact on the staff.

Edwards & Zuck, the engineering firm on the project, said the building is one of three LEED Platinum-certified high-rise buildings on the Eastern Seaboard, and one of only 13 of its size in the world.
THE DETAILS: